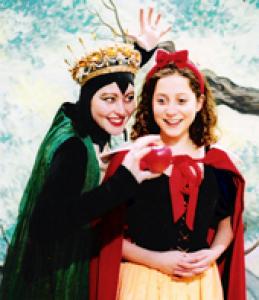 This pantomime follows closely the story of the famous fable but in a special twist replaces dwarfs with garden gnomes.

It means your company can cast regular sized people.

All of the traditional adventures are in the hilarious script.

There is of course a wicked Queen, the Magic Mirror on the wall, a bewitched huntsman ordered to kill Snow White and friendly animals.

A poisoned apple and finally a kiss from a passing Prince to round everything off nicely.

"The blushing darlings of the show are, of course, the seven dwarfs – an overgrown line-up of adults ranging from the 5ft-nothing Dopey to a stocky 6ft 7 Bossy. Many of the much-deserved laughs derive from the antics of this clattering seven-a-side team." wrote critic Clare Goddard.