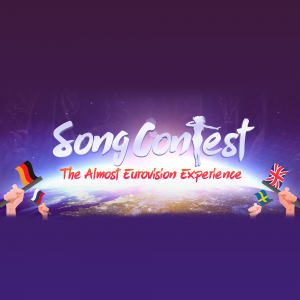 A glitzy comedic and loving tribute to  the Eurovision Song Contest. It’s as close to the real thing as you can get, with eleven countries competing, a multitude of anxious contestants, a gushing hostess and all the quirkiness that both delights us and makes us cringe in a single breath.

It’s just like being at the finals of Eurovision, which this year happens to be in Belarus’ capital city, Minsk.   Song Contest is a cross between a musical comedy, a concert and a sporting event. It’s an exhausting but ultimately affordable, uplifting top night out. What could be better? Includes an authentic text based voting system for the audience so every night can have a different result.

All original songs  – each one very “Eurovisiony” (yes that is a word.) This show has wind-blown hair power ballads, pretty glitter boy pop, soulful groove and all manner of patriotic foolishness. It’s all here. The songs are top shelf and sound just like something you have heard before on Eurovision, only different and a bit wrong.