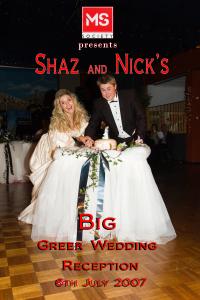 Not just an outrageous comedy. This is an event as a Greek Grandmother comes back to haunt her grandson  NICK Kakamanospillipapadimiopoulis,at the worst possible time.

"I am a Greek. I am a dead Greek. I am a dead Grandmother who is a Greek. Today is my favourite grandson’s wedding. His name is Nick. Nick, he is a good boy. But then he say to me I am marrying this Sharon and we are not having a NAN: traditional wedding. I say to him, “Are you trying to kill your
Grandmother?” Now, I am the one who I laughing because  was right. He kill me."

Have lots of fun and raise money for the MS Society by staging this play.

See the Camperdown Theatre Company's photo gallery from their 2016 season.

Entrée
Act 2 (30 minutes approx) “the story”... Re-creates elements such as meeting the parents, the buck’s night, the hen’s
night etc and includes song and dance numbers...

Act 3 (20 minutes approx) A flashback to Nan’s wedding
(educational and interactive, juxtaposing tradition with the
contemporary), followed by the speeches and the wedding
reception formalities...

Desserts / dancing (the premiere included a band as part of
the show)
Having mentioned the cast being required to contribute their
own ideas to the performance, here are examples of cast
members each adding their own touches to the characters and
scenes. The actor portraying Nick the Groom was also an
accomplished stand-up comedian, so he turned the Groom’s
speech into a routine all his own, devastating the décor and
a few local identities who were in the audience. The female
cast members were all song and dance girls with vast
experience from musicals, thus the inclusion of a major
Broadway number at the end of the second act, deliberately
done in a style best described as “drunken hens-night” and
aimed squarely at the poor blokes sitting at the tables
nearest them. Another example - the actor playing Nan
improvised on the night that people might like to call her
“Nanna” Maskouri. It’s now in the script.

STAVROULA, a ghost, the deceased Greek NAN of the Groom

GEORGE Kakamanospillipapadimiopoulis, brother of the Groom

COLIN Smith, brother of SHAZ and a Groomsman

CARLOS REAL-NAME-BRUCE, cousin of the Bride
BARRY, the actual Technician or sound and lights guy,
referred to only, non-speaking