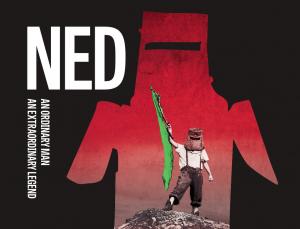 NED explores the extraordinary highs and devastating lows of Ned Kelly’s journey from local hero to felon to legend. Audiences will see themselves in the struggle of a poor family trying to make it through in a system that was stacked against them.

Adam Lyon (King Kong) has written a hauntingly beautiful score that captures the sounds of the bush, while the libretto has all the raucous humour, warmth and tragedy audiences expect from this iconic story. NED is a truly Australian theatrical experience.

"Quite simply the best entirely Australian musical ever." Stage Whispers

"Composer Adam Lyons has created an accessible, engaging score, the high quality of which is cause for celebration." Simon Parris.

"Adam Lyon's score is so well written (and orchestrated) that it deserves to be heard here and abroad." Theatre People.

Visit this link to see highlights of the original production in Bendigo. The spectacular set is available for hire.

Our story is set in the late 1800's in early Irish Australia - "Kelly Country" in North-Eastern Victoria.  We begin in the last moments of Ned Kelly's life as he is prepared to be hanged.

Quickly we are transported back to Ned's childhood as a young Ned Kelly regales his mother Ellen and father Red with a tale of his rescue of a drowning boy, and proudly displays the green sash he is rewarded with. Young Ned witnesses his father's brutal arrest. Five years pass and an adolescent is before the courts for petty misdemeanours with a well grained disrespect for the police.

He serves three years and is released returning to the Kelly family homestead where we meet his family and friends, sisters Maggie and Kate, brother Dan and friends Joe Byrne, Steve Hart and Aaron Sherritt.

The boys labour at the railroad and are approached by Constable Fitzpatrick who they ridicule. Later at Anne Jones Inn Fitzpatrick has an altercation with Ned after showing interest in young Kate Kelly. Fitzpatrick attends the Kelly home and drunkenly makes advances on Kate, Ellen steps into protect here and subsequently Fitzpatrick arrests Ellen claiming attempted murder. Ned, Dan and the boys flee to the bush to avoid their own arrest, as Fitzpatrick further falsifies his story to target them. While hiding in the bush the boys come across four policemen.; three police are killed when they draw weapons on the Kellys. Ned, Joe, Dan and Steve are outlawed - barely 20 years old, they are now the Kelly Gang.

Superintendent Hare leads the police in pursuit of the Kelly Gang placing a huge reward on their heads, but the Kelly legend is growing and no-one will give them up. Hare tries to entice Aaron to provide information against his friends. The Gang rob the bank and destroy the debt records of the poor. Maggie and Kate bring supplies for the boys in between police raids on the Kelly property, while Ellen repeatedly suffers repeated interrogation in gaol.

When Joe suspects Aaron of being a police informant, he seeks solace with Ann Jones before going to take care of the problem. The police escalate their pursuit of the Kellys with a train of policemen sent up from Melbourne. Ned plans to intercept them by damaging the railway and gang set up for a siege at the Inn.

The gang fully armoured take on the police. Ned leads the local people to safety and in his absence Hoe is shot and Fitzpatrick sets fire to the Inn. Gunshots ring out as Dan and Steve take their own lives. Knowing his friends have been killed Ned returns and takes his final stand against the police, and wounded he is captured wearing his precious green sash.

Ellen sees her son for the last time as he is sentenced, and Ned is confronted with the vision of his youth as he is hanged.

Mrs Byrne/Local/Lady/Local at the Inn