My Inlaws are Outlaws 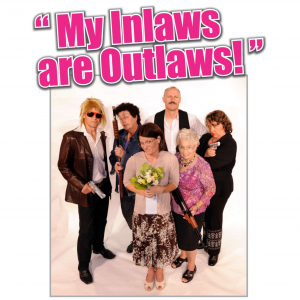 Annie discovers her in-laws are outlaws... and her mother in-law has hired a mad group of assassins to kill her!

How will Annie, a mild mannered Librarian, outwit the best of the Italian, Russian and Irish contract killers?

This is outrageous, laugh out loud, comedy at its best.

Annie: 30 – 40 years old. Married to Dane. A librarian, timid, not very adventurous, her family died in a car accident when she was a child. A small scar is only just visible on her neck. Has a lot of knowledge about the world but little experience in it. By the end of the play she has become an independent self-assured woman.

Audrey: 50 - 60 years old (or around 20 years older than Dane). Dane’s mother and current head of the mob family. Hard, manipulative, very short tempered. Tired of running the family business due to her husband being in prison.

Desiree: 30 – 40 years old. Danes sister, dreams of being a notable mobster but only has the intelligence to become a notable moron. Speaks with a thick Welsh accident. She is not Welsh.

Granddad: 70 - 80 years old (or around 20 years older than Audrey). Audrey’s father. Losing his mind. Almost exclusively repeats what other people say. Much loved by the family.

Grandma: (or around 20 years older than Audrey). Audrey’s mother. Hard, violent women in her golden years with an extremely short temper. Devoted to Granddad. Loathes Desiree.

Natalya: 30’s – 40’s Russian hit-woman. Poor English but understands much more than she can speak. Shows little emotion. Speaks in a deep monotone. Very dangerous and surprisingly smart.
Can be played by the actor playing Desiree.

Finn: 50’s – 60’s former IRA fighter. Dangerous and violent. Trying to train his idiot son in the family business of killing.
Can be played by the actor playing Granddad.

Donal: 30 – 40 years old. The idiot son of Finn. Has a fear of doorways. Emotionally unstable with huge emotional swings. Trying his best to learn his father's trade but incapable of doing so.
Can be played by the actor playing Dane.

Rosa Botticello: 90 years old. Legendary Italian assassin. Has a pacemaker.
Can be played by the actor playing Grandma.