The Merry Widow From Bluegum Creek 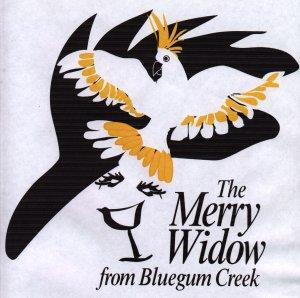 The Merry Widow is unchallenged the most popular Operetta of the 20th Century . Now the soaring pulsy sexy music has been lifted by a magnificent, hilarious new libretto.

This new work is so good it has been endorsed by the estate of Franz Lehar.

FRANK HATHERLEY, writer and BBC TV producer, has completely re-written the Merry Widow. Instead of it being the Pontevedrinian Embassy in Paris, it is the newly installed Australian Embassy, in Paris the first from the new Commonwealth in 1901.

It is very very funny. The Embassy is told if the Merry Widow ,a young Blond bombshell the widow of a Wool Baron, does not marry an Aussie, the new Commonwealth of Oz will go broke.

PLEASE NOTE NO MUSIC IS CHANGED. WE CANT IMPROVE ON THIS. It's also the same basic plot, but with a twist. It’s full of great jokes, for instance the new Embassy has a flag design competition for Australia with hilarious consequences.

Can be staged with a string quintet and 2 keyboards. ( One of the characters makes a joke about small band) Or Optional extra Wind, Brass and percussion.