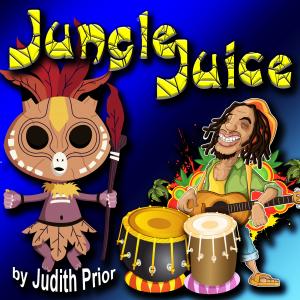 An undiscovered tribe's reaction to the arrival of three people from the outside world.

When the plane lands on the island beach, out of fuel and hopelessly lost, the two rock stars and their press agent can think only of returning to civilisation. The island has a severe man shortage and the natives are restless.

A complete send up of everything to do with the jungle. Guest appearances by such unlikely characters as, a big game hunter, a witch, a witch doctor, Tarzan and Jane, to name a few.   A zany farce with simple set and costumes, ideal for theatre restaurant or stage. A tropical cocktail of melodrama and music, somewhere between Brigadoon gone troppo and The Gods Must be Crazy.

nverell Theatre Group NSW. "JUNGLE JUICE was great! The audience loved it, so did the cast."

"The audience was mesmerized and it was a laugh a minute. It was wonderful to watch our community lift during a drought."  Merle Hemming from Koorda Music and Drama Club Western Australia 2012.

The story of a  tribes reaction to the arrival of three people of the "Outside World." Jungle Juice is set on an unknown island in the tropics. It doesn't have to be any-where in particular. The natives can be slightly Aztec or Polynesian, or white. Costumes may be sarongs, kaftans or grass skirts with the Queen the witchdoctor and his apprentice perhaps in capes, or long robes with way-out headgear.

A complete send up of every-thing to do with the jungle, with special guest appearances by such unlikely characters as A Big Game Hunter, Two famous rock stars, The Witch of the Woods and Tarzan and Jane just to name a few!

The mysterious disappearance of all the young men from the island and the efforts of the evil witchdoctor Ngombi and his accomplice Hannibal the Cannibal to evict the intruders while avoiding the advances of the man hungry maidens of the island and their raunchy sex starved Queen Ophelia lead to some comic situations.

Add to this a pagan idol feared and respected by the natives, Atoomi the delightfully naive and accident prone witchdoctors apprentice, a diamond mine, a volcano with a short fuse, a sex starved gorilla, a native brewed Jungle Juice with magical powers, a press agent the intrepid News Paper reporter...... Helen Back....and...Any thing can happen...

Let's just say Jungle Juice is a Tropical Cocktail of melodrama and music somewhere between Brigadoon gone troppo and The Gods Must be Crazy ! An adult Fairy Story with a surprise ending where nothing is sacred but everyone ends up living happily ever after... Well nearly everyone!!

1. The Lion Sleeps Tonight.
or My Friend the Witchdoctor.

4. All I Have to Do is Dream.
Any song about Dreaming.

6. The Only Man on the Island
or any Rock Song.

7. I Like Beer, or Beer Glorious Beer.
Duncan, or any Drinking Song.

8. I've Never Seen Any-thing Like it in My Life.

10. Lovely Hula Hands or
Keep your eyes on the Hands

12. Civilisation, or Side by Side.

N.B. This script is text only. The above music is an indication only of the type of song suitable.... music is of your own choosing and copyright permission if applicable should be sought from the appropriate publishers of any songs used.

Cast required. Twelve principals and a chorus of women and girls.

QUEEN OPHELIA . Queen of the Island.

BABALOO. Male or Female. Wait and see! (A Gorilla)