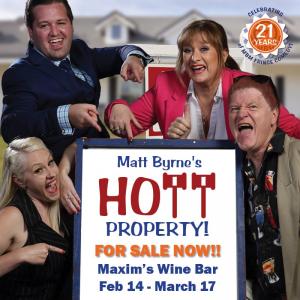 Four actors play these roles but they also play a dozen other people you may run across in the real estate world.

It’s the ultimate acting experience and fun for the crowd too!

There’s few costume changes, but plenty of character changes as the cast play up to 40 different people.

You’ll need some song and dance and Matt Byrne can provide the backing tracks.

“No houses were sold in the making of this production, but they sold me. Another arrow flung from the bow of Robin Hood Byrne and directly on target!”  David Grybiowski, Barefoot Review

"Packed with ample puns and jokes that are far from PC, Hott Property sure had the audience in fits of laughter!” Samantha Rose, Weekend Notes.

“This is not Shakespeare, nor does it pretend to be. Byrne does what Aussies do best by ‘taking the piss’ out of an industry which does not favour the Aussie battler.” – Kerry Cooper, Stage Whispers.

The four man characters introduce themselves at the start of the show:

Red: I’m Red Hott, the Real Estate King, I’ve been selling houses for 50 years in every state in Australia, often in two states at once. Hott Houses for Cool People! If It’s Hott We’ll Buy It! I’ve been through the hoop more times than Nadia Comanenci. But I stand behind every deal I’ve ever made … makes you a bit more difficult to spot. The great Australian Dream is what I sell. Everyone should own their own home and while the prices go up and up the interest rates stay down and down. They can’t afford to put ‘em up because they’ll lose their customers. So you can afford to aim higher, $500,000.00 is the new $300,00.00. The quarter acre block may be gone and the Hills Hoist has gone with it, buy don’t give up the great Aussie Dream! I know prices are still going up so you’d be crazy not to jump in now! You trust me don’t you? Oh we’re gonna have a great night!

Smokin: I’m Smokin’ Hott, longtime wife and partner of the relentless Red. They call me Smokin’ Hott (pause while adjusting chest) because I can’t quit – Red or the ciggies. We’ve been through the thick and thin – he’s the thick, so you can see how I’m travellin’. We’ve been a team for a long time, he makes the deals and I clean up the mess. Red could sell VD to a clinic, but he’s not too great on the follow through so I’m the human face of Hott Property and yes I’m sure I could do with a lift. I just wish I could get rid of these (refers to ciggie in her hand) but nicotine is more addictive than real estate. It’s easy to quit smoking, I quit 6 times last year. Red’s the big picture man, I work on the small details. We’ve had one weekend off in the past 30 years and that when this one arrived!

Pipin: I’m Pipin’ Hott their darling daughter, heir to the phone (shows her mobile) I wanted to be a model but Mum and Dad convinced me there was more money in real estate than billboards. I was an early developer and when Red and Smokin’ realised I had more front than Myers, they mapped out a career for me, that used my assets. Funny thing is I still ended up on billboards. Mum says I’m a chip off the old rack, there’s no doubt beauty runs chest deep in the Hott family. You’ve heard of the Iron Age and the Bronze Age … well Smokin’ and I are the Cleave Age. I’m the first person you meet at a Hott Property and I provide the personal touch that husbands love and wives hate. Red and Smokin’ are old school so it’s my job to drag them into the 21st Century. I look after all Social Media: Fussbook, Instaspam, and Tinderbox. I do the website, the Hottcam and Twatter #pipinhott#treasurechest#homebody#callme24/7. I kept meeting Mr. Rightnow instead of Mr Right until I met Terry and right away I knew he was the one. He didn’t just want me for my body ... he wants me for my money!

Terry: I’m not a Hott, I’m a Trott, Terry Trott. Pipin’s fabulous fiancé with an eye on the boss’ daughter and an ambition to take over the Hott Property Group – but don’t tell them! Red’s been rorting the Real Estate world since the Ark settled in Ararat. Pipin is the best deal they ever made. She’s the Hottest girl I ever met. And when I saw how much Red and Smokin’ were raking in, I knew I had met the girl of my dreams. Selling houses is about selling dreams. Most people spend more time researching how to buy a car than they do a house. So long as you get them hooked at the start it’s surprisingly easy to land them. It’s even better if two suckers want the place, then the big bucks really start to rise. And auctions, well that’s just printing money on the spot! The market has slowed down a bit in recent times but the prices keep rising. Like my love for Pipin’ – we were meant for each other, it’s an engagement made in Zirconia!