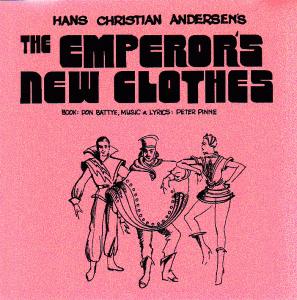 “One of the best children’s stories in a contemporary soft-rock glitter style.”

Han Christian Anderson’s fairytale, about an Emperor who is tricked by a couple of con men into believing in invisible clothes, is updated with a brilliant soft-rock score and a host of delightful characters. Fashion, games, and dance are the order of the day. The Emperor’s New Clothes is a show that gives ample scope for a creative costume designer, and can be mounted with a minimum of sets.

Madame, the royal couturier shows her latest fashion designs to the Emperor and is stunned to find he doesn’t like them. Frederick her son wants to marry the Emperor’s daughter.

The Emperor agrees if Frederick beats him at all his games. Wheeler and dealer, two visiting con men convince the Emperor they can make him a fabulous wardrobe of clothes with lots of color.

The Emperor agrees and puts the royal silkworms to work on overtime. Instead of concentrating on frivolous pursuits like clothes and games, the Prime Minister tries to get the Emperor to spend more time running the country to no avail. Wheeler and dealer con the Prime Minister into believing they have made some incredible clothes when in actual fact they have made nothing.

The Prime Minister doesn’t want to look a fool so he goes along with the pretence. Madame, outraged at being usurped, is determined to climb back on top and produce something dazzling.

The Emperor demands an update on the clothes progress from the Prime Minister, the Emperor misconstrues his words and plans a big procession tomorrow to display his new clothes. Meanwhile the Emperor starts playing games with Frederick, believing he will win because he always does, but reluctantly concedes defeat in all of them.

Wheeler and dealer are paid in gold for their services and celebrate that they’ve done it again – hoodwinked a client into believing in invisible clothes. The Emperor and Frederick play their final game, a game of chess, which Frederick wins. Frederick and the Emperor’s daughter plan for their wedding right after the Emperor’s new clothes procession tomorrow.

The Emperor proudly leads the procession in his royal knickers. No one mentions it until a young urchin in the crowd shouts he’s only wearing his underwear that the Emperor finally realizes he’s been connced. Wheeler and Dealer are arrested, Frederick and the Emperor’s daughter are united, and Madame returns, back on top, with some dazzling new designs for the wedding.

Madame
40 A top class fashion designer with an iron will and a determination to regain her status when she is usurped. Powerful chest voice required.

Frederick
20-25 A young man who’s a whiz at games, and whose eyes are only for the Princess. Pop voice required.

Princess
20-25 A sweet, pretty girl who wants to marry and live happily ever after.
Pop voice required.

Prime Minister
30-40 Pompous, uptight, and a stickler for the rules.

Back Up On Top.

All the Colours of the Rainbow.