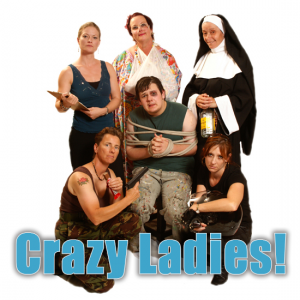 An outrageous comedy. Five school friends stage their own reunion after 25 years apart. Friendships are rekindled, secrets are revealed, a janitor is kidnapped!

Added to the mix is Sandy, who is now a Nun, Dianne, married the school nerd and a mother of eight sons, Rachel, a runaway teenager on a mission to dig up some dirt on her mother, and Shaun, the greasy motel janitor. This outrageous comedy is a rollercoaster ride of emotion.

Sandy: Dressed as a nun. Good sense of humour and a mostly well adjusted individual.

Shaun Phillips: Motel employee. Former high school stud who is a shadow of his former self.

Note: Both Rachel Jr and Rachel Snr are played by the same actor.